ITV Racing review
ITV racing promised to give viewers the ‘best seat in the house’ when they took over terrestrial coverage of racing on New Year’s Day, but it wasn’t all plain-sailing during their opening broadcast from Cheltenham.
The channel have ended the studio-style analysis favoured by Channel 4 with Ed Chamberlin based in the paddock to host in the style of Des Lynam and David Coleman.
It proved a cracking idea in the main, with the excellent Chamberlin able to bring a matey sense of being right up in the action, stationed as he was in the parade ring.It is hard to imagine there will be many more miserable days weather-wise, so this can only get easier in the week’s and months ahead.
Some umbrellas or lens cloths for the camera operators might help it feel less like the team was broadcasting from inside a swimming pool.
Chamberlin was flanked by Sir AP McCoy and Luke Harvey, and all three impressed despite being left battered by the elements.
Matt Chapman was used in the John McCririck role, roving around the betting ring, but the guy is like Marmite. You either love him or hate him. 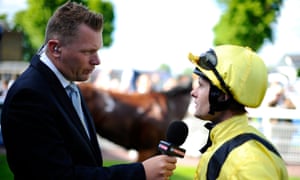 After announcing that O O Seven was a non-runner at the start of the programme, the incredibly-annoying Chapman failed to catch on that the horse wasn’t even running.“I wonder if he will have a licence to thrill,” boomed Chapman before Chamberlin shot him down in flames by saying: “What a load of nonsense, that horse is a non-runner.” Just a few minutes later, Chapman openly criticised a bookmaker for spelling the word ‘forecast’ wrong on his board.
Is this the kind of nonsense and dribble racing punters want to see or hear?The channel should trust the interviewers, the pundits and the raw sport but, most importantly, they should ditch Chapman from their racing schedule or give him as little time as possible on air.
Build on that going forward and they won’t go far wrong.
BEST OFFER