Dual Cheltenham Gold Cup runner-up Djakadam made a winning start to the campaign when he successfully defended his crown in the John Durkan Memorial Punchestown Chase earlier this month.

A return to three miles is likely to see him in an even better light and jockey Ruby Walsh expects the Willie Mullins-trained gelding to strip fitter for his comeback run.Former Mullins inmate Valseur Lido made a hugely impressive start for Henry de Bromhead in the JNwine.com Champion Chase at Down Royal.The seven-year-old is one of five runners for Gigginstown House Stud, with the Gordon Elliott-trained pair of Outlander and Don Poli joined by Noel Meade’s duo of Road To Riches and Wounded Warrior. 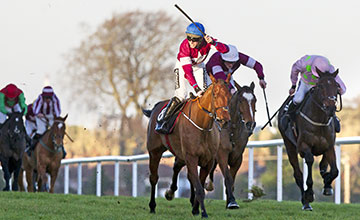 Outlander was beaten just over a length by Djakadam at Punchestown, while last year’s Lexus hero Don Poli was hugely disappointing on his first start for Elliott at Down Royal.

Fine Rightly is an interesting outsider for trainer Stuart Crawford.The eight-year-old was third in the Irish Gold Cup over this course and distance in February and will benefit from a step up in trip, having proved no match for the brilliant Douvan in the Hilly Way Chase at Cork less than three weeks ago.Other contenders in a 14-strong field include Gilgamboa, the Jonjo O’Neill’s pair of Taquin Du Seuil and More Of That and Lord Windermere, the 2014 Gold Cup winner who made such a pleasing return to action at Thurles in November.

Vroum Vroum Mag bids to bounce back from her narrow defeat at Fairyhouse at the start of the month in the Squared Financial Christmas Hurdle on the same card.The seven-year-old suffered her first defeat in 11 starts since joining Willie Mullins when narrowly beaten by former stablemate Apple’s Jade in the Hatton’s Grace Hurdle.

The champion trainer’s son and assistant, Patrick Mullins, expects the top-class mare to bounce back.

The Noel Meade-trained Snow Falcon impressed in the Lismullen Hurdle at Navan on his penultimate start and was still travelling powerfully when falling three flights from the finish in the Long Distance Hurdle at Newbury last month.Kotkikova is a fascinating contender for Nicky Henderson.

The JP McManus-owned mare was prolific over hurdles and fences in France and makes her debut for her new connections in this Grade One contest.Gordon Elliott’s De Plotting Shed and the Mouse Morris-trained Milsean complete the line-up.